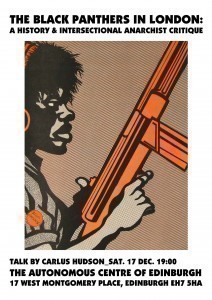 The Black Panthers are one of the most pivotal organisations in the histories of radicalism and anti-racism in the United States, and their ideas have had an enormous impact on activists who have come after them. Far less famous, but by no means less significant, was the Black Panther Movement in Britain. Active in the late 60s and early 70s, its history touches on the fight within the anti-racist movement in Britain between its liberal and radical wings, and the internationalisation of struggles against colonialism, neo-colonialism and the Vietnam War. Focusing on the Black Panthers based in London, this talk will tell their story before delving deeper into the development of the movement’s culture and organisational models. The talk will examine the Black Panthers from the perspective of intersectional anarchism, and show its shortcomings in terms of gender, class, and political hierarchy.